How do Americans Spend Money? US Household Spending Breakdown by Household Composition

How much do US households spend and how does it change with household composition?

This visualization is one of a series of visualizations that present US household spending data from the US Bureau of Labor Statistics. This one looks at the marital status and presence of children in the household.

This visualization focuses on how spending varies with the household composition (marital status and presence of children).

I obtained data from the US Bureau of Labor Statistics (BLS), based upon a survey of consumer households and their spending habits. This data breaks down spending and income into many categories that are aggregated and plotted in a Sankey graph.

One of the key factors in financial health of an individual or household is making sure that household spending is equal to or below household income. If your spending is higher than income, you will be drawing down your savings (if you have any) or borrowing money. If your spending is lower than your income, you will presumably be saving money which can provide flexibility in the future, fund your retirement (maybe even early) and generally give you peace of mind.

The composition of households and income change as the marital status of and presence of children in the household changes, which in turn affects spending totals and individual categories.

As stated before, one of the keys to financial security is spending less than your income. We can see that on average, income tends to increase the larger the number of children and adults in the household. Married couples with children have the highest incomes and greatest spending, but they also save the most money.

Households with a single occupant (and also single parent households) have lower incomes than married couples and on average need to borrow or draw down on savings to live their lifestyle.

How does your overall spending compare with those that have the same household composition as you? How about spending in individual categories like housing, vehicles, food, clothing, etc…?

Probably one of the best things you can do from a financial perspective is to go through your spending and understand where your money is going. These sankey diagrams are one way to do it and see it visually, but of course, you can also make a table or pie chart (Honestly, whatever gets you to look at your income and expenses is a good thing).

The main thing is to understand where your money is going. Once you’ve done this you can be more conscious of what you are spending your money on, and then decide if you are spending too much (or too little) in certain categories. Having context of what other people spend money on is helpful as well, and why it is useful to compare to these averages, even though the income level, regional cost of living, and household composition won’t look exactly the same as your household.

Here is more information about the Consumer Expenditure Surveys from the BLS website:

The Consumer Expenditure Surveys (CE) collect information from the US households and families on their spending habits (expenditures), income, and household characteristics. The strength of the surveys is that it allows data users to relate the expenditures and income of consumers to the characteristics of those consumers. The surveys consist of two components, a quarterly Interview Survey and a weekly Diary Survey, each with its own questionnaire and sample.

Data and Tools:
Data on 2017 consumer spending was obtained from the BLS Consumer Expenditure Surveys, and aggregation and calculations were done using javascript and code modified from the Sankeymatic plotting website. I aggregated many of the survey output categories so as to make the graph legible, otherwise there’d be 4x as many spending categories and all very small and difficult to read. 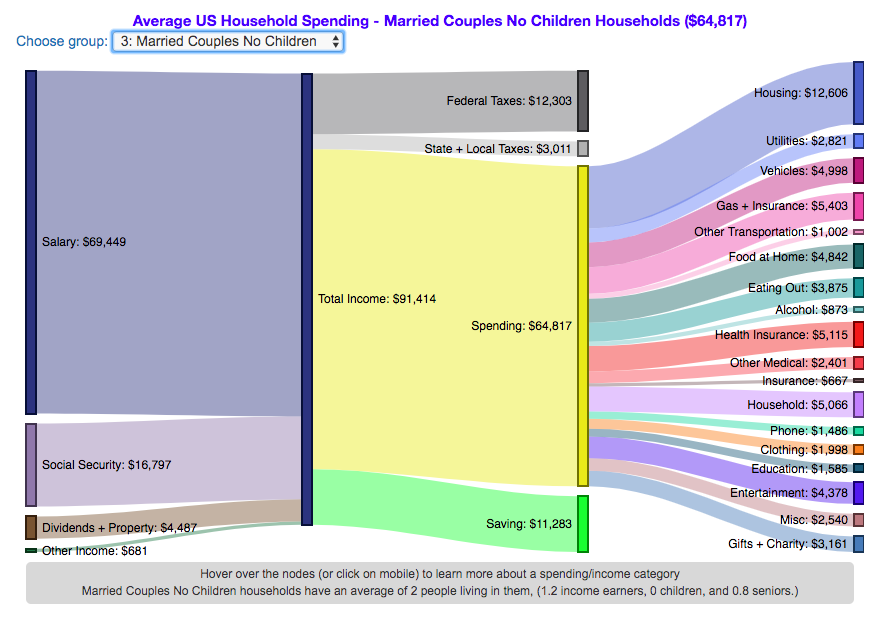 2 Responses to How do Americans Spend Money? US Household Spending Breakdown by Household Composition