I recently taught my daughter how to solve the rubik’s cube using “the beginner method”. She’s getting decently fast, but when we watched some youtube videos about really fast speed cubers, we were blown away by how fast people can solve the cube. The world record time is under 4 seconds! I thought it’d be fun to document the progression of world records since the cube was introduced in 1980.

What was interesting in looking through the records are the strange events that people compete in and post amazing times in. Blindfolded! With Feet! One-handed! Feet or one-handed is at least in the realm of possibility, though it would slow down my already slow solves, but blindfolded is next-level stuff.

Hover over the different data series for the events to see the record-holder’s name, country, solve time and competition for each world record. You can also toggle the y-axis scale from linear to log scale in order to distinguish between the latest world records as they tend to converge and have very small changes.

Not sure if it’s motivating or discouraging to see these ridiculously fast solve times. Knowing that we’ll never be able to beat people who solve the cube blindfolded is a bit humbling.

Data and Tools:
Data was downloaded from cubecomps.com, a speed cubing website and the data was plotted using the open-sourced Plot.ly javascript engine. 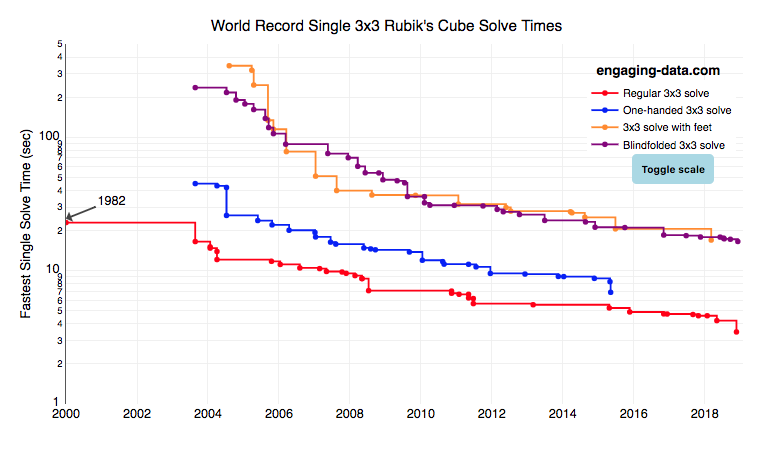