How Rich is Elon Musk? – Visualization of Extreme Wealth

See related visualization: How much wealth do the world’s richest billionaires have?

This visualization attempts to represent how much money Elon Musk, the richest person in the world, has. It gives context on this extreme amount of wealth by showing other very large sums of money that are somehow less than his net worth.

Each pixel on the screen represents a very modest amount of money (from 500 to 4000). As you scroll to the right, you will start to understand how incredibly large one billion dollars is, let alone hundreds of billions. You can change the amount of scrolling needed to get to the end of the visualization by selecting the amount represented by one pixel in the drop down menu.

This visualization was inspired heavily by a similar visualization made by Matt Korostoff for Jeff Bezos (when he was the richest person in the world) called “Wealth shown to scale”.

If you have any ideas about other items that could be added to the money chart, please leave them in the comments, and I will see if I can add it.

Mega-billionaires such as Musk or Jeff Bezos are not just extremely rich, the wealth they possess is unimaginably large. There are some extremely rich folks shown in the visualization who can buy pretty much whatever they could ever possibly need and yet their wealth is closer to that of the average person than they are to that of Elon Musk.

The full list of data sources for the various money amounts are listed below. The visualization was made using HTML, CSS and Javascript code to create interactivity and UI. Data from Bloomberg’s Billionaire’s index , which is the source of Musk’s (and others) estimated wealth, is updated regularly. 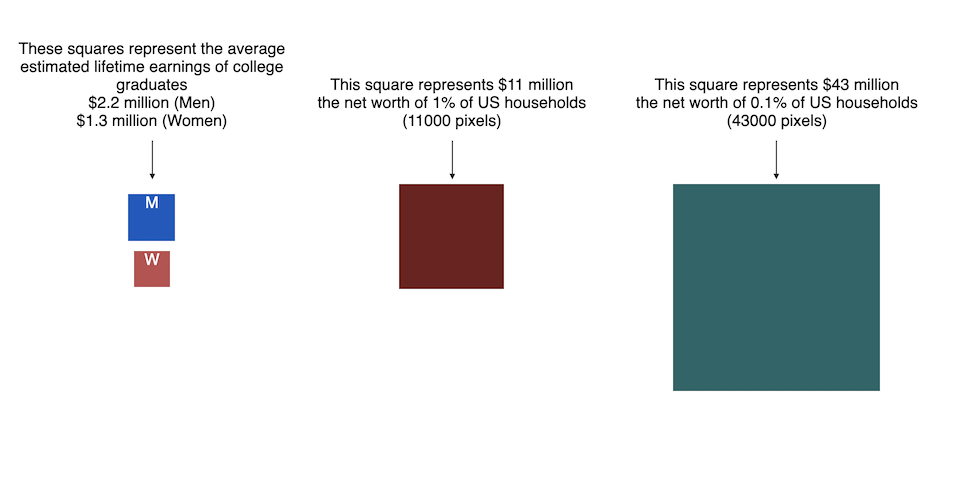 One Response to How Rich is Elon Musk? – Visualization of Extreme Wealth