How Much Water is in California Reservoirs? – Current and Historical Visualization

**Check out the new reservoirs dashboard** 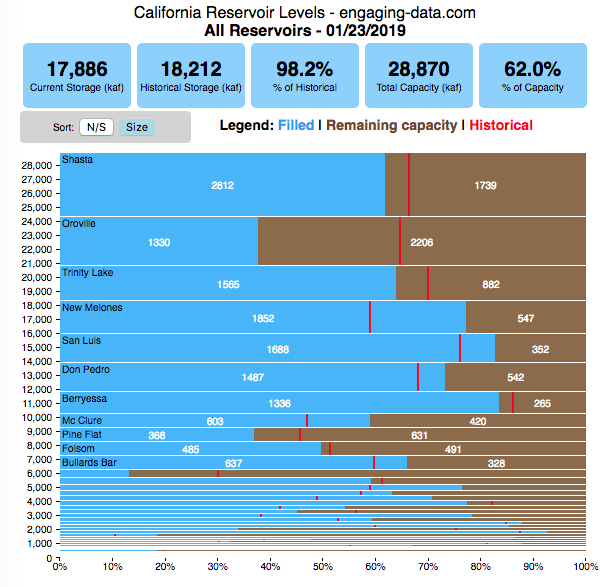 California has had an issue with drought, especially for the past few years now.  Recently, 2016-2017’s El Nino weather patterns has brought a significant amount of rain to the state and helped alleviate some, but not all, of the major issues.
I’ve been very curious to understand how the rain storms we experience are lessening the impact of the drought, and whether one wet season (like 2016-2017) can really “get the state out of a drought”.  One way to assess this is to look at the status of California reservoirs.

I created this stylized “bar” graph to show the total current status of 46 reservoirs in the state (it is updated daily and shows yesterday’s reservoir level).  The figure represents the total of these reservoirs using the outline of the state as a “container” which can “filled up”.

This second graph shows the historical storage levels of 46 of the largest reservoirs in California from 2009 until the present. The top 10 reservoirs are shown individually, while the remaining 35 are grouped together in the “Other” category2The names and codes of all 46 of the reservoirs I am tracking can be found on the California Department of Water Resources website – http://cdec.water.ca.gov/cgi-progs/reservoirs/RES. Hover your mouse over the graph to get data about specific reservoirs on a specific date (a popup on the cursor or on the legend). The total storage level can be compared to the historical average total reservoir storage levels. You can also zoom in to look at a specific time period via the scroll bar or by dragging the cursor between to dates.

As you can see, 2010-2012 was a relatively wet period, while the last couple of years have seen reservoir levels well below the historical average. Spring of 2013 was the last time before this recent drought that reservoirs were at or above their historic levels.

These graphs are created dynamically using data from the California Department of Water Resources (updated daily), so you can check this post occasionally to see how the precipitation are changing the levels of water in the state reservoirs.

early March 2016: Current California reservoir levels are significantly below the historical average.  The winter 2016 rains are certainly helping the cause, but it’ll take time for the reservoirs to fully recover.

mid March 2016: The recent heavy winter rain storms have made a huge difference and the total reservoir storage is getting quite close to historical average.  In fact, several reservoirs are near or above their historic average.

January 2017: The huge storm in California has finally pushed reservoir levels above their historical average for the first time since the spring of 2013 (almost 4 years).  Unfortunately, all that rain has been accompanied by a bit of flooding in some areas.  Hopefully, snow pack and reservoir levels will hopefully continue to improve.

Summer 2018: The huge gains made in 2018 have mostly disappeared and reservoir levels are now back below historical levels again heading into the 2018-2019 water year.

16 Responses to How Much Water is in California Reservoirs? – Current and Historical Visualization