What is Tridle? Triple Wordle

Tridle is a game based on the hugely popular Wordle by Josh Wardle, where you try to solve three puzzles (Triple Wordle) at the same time. It is also modeled after Dordle and Quordle, but a little different (3 instead of 2 or 4!)

Shortly after I started playing Wordle in early January, I wanted to play more games so I decided to make a Wordle game so I could play as often as I wanted. I made WordGuessr in a day or so. It ended up being fairly popular and lots of people still play.

Recently, I started playing Dordle (where you solve two puzzles simultaneously), which adds an extra layer of challenge onto the Wordle game. I thought that a triple Wordle game would be a fun game to code up and since I’d already made the structure of the single game, how hard could making 3 be. Well, it took me another day or so to work out all the kinks and it was also stretched my CSS skills to get all the look correct with all the various permutations of the game and generating three boards simultaneously.

If you know how to play Wordle, then the rules are the same:
1) just type in a guess and and press ‘Enter’.
2) the game will indicate how good your guess was for each puzzle separately. If any letter are in their correct position they will turn green, if they are correct but in the wrong place, they turn orange, and if they don’t show up in the word they turn black.
3) guess again, using the clues from the previous word
4) repeat until you get each of the words correct or fail to figure them all out after 8 tries.
5) you can share your results with other folks
6) play all you want

The game is created using HTML, CSS and Javascript code to create interactivity and UI. 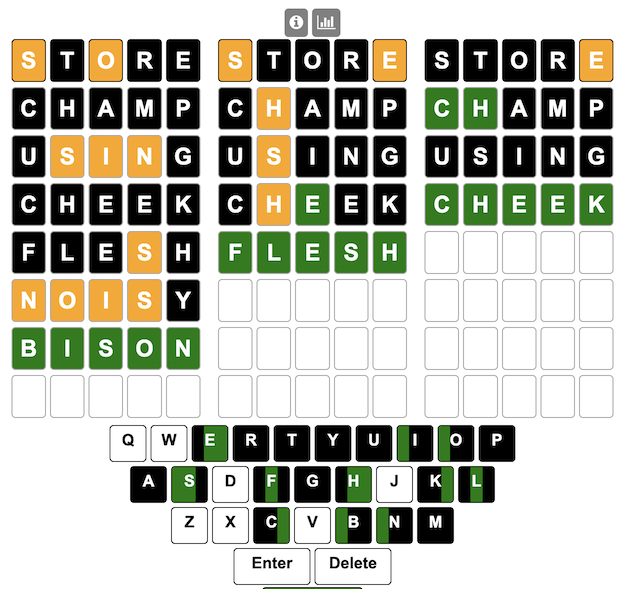