You can do your Wordle practice training here with unlimited attempts.
As my wife likes to say, “Practice makes ‘Pretty Good'”.

I made this Wordle clone in about a day after playing with Wordle for a few days. My wife and I were pretty hooked and I wanted to play more than once a day. It’s like a word version of Mastermind. I also thought it would be fun with words of different lengths, so I added the option for words between 3-7 letters long. Depending on the number of letters, the game feels very different. 3 letters is very short and it’s easier in some respects but you have to guess more. Longer words require much more thinking.

The rules of the game are pretty simple:
1) just type in a guess and and press ‘Enter’.
2) the game will indicate how good your guess was. If any letter are in their correct position they will turn green, if they are correct but in the wrong place, they turn orange, and if they don’t show up in the word they turn black.
3) guess again, using the clues from the previous word
4) repeat until you get the word correct or fail to figure it out after 6 tries.

I added the ability to create a challenge game that allows you to share a link (with a unique code) which will enable anyone with the link to play the same word.

Apparently, my site is unblocked on education websites (which makes sense since it has a lot of educational content), so I seem to be getting lots of traffic from Chromebooks searching for “Wordle Unblocked”.

You can also share your guessing results (not the answer) with a grid of boxes, like the original Wordle, as shown below:

I also added the game stats which should persist across games and lets you look at stats for games of different word lengths individually as well as all your games.

I wasn’t sure what how the original Wordle game handles duplicate letters so I made up my own set of rules for how it would happen. First, if there are multiple instances of a single letter (e.g. two ‘E’s in a word) and you make a guess of a word with two ‘E’. If one is in the correct spot and one is in the wrong spot, one will be green and the other orange. If both are in the wrong spot, they will both be orange. If there is only one ‘E’ in the answer but you guess two, one will be black and the other will be green or orange depending on its position.

Sources and Tools:
Obviously a big shout out to Josh Wardle and his Wordle game, as this is mostly a carbon copy of his game with a few additions.

I downloaded the most common words in English from the English Lexicon Project Web Site at Washington University in St. Louis. Then I processed these to remove foreign language words and other strange entries and split them into groups of words by number of letters using Python.

The game is created using HTML, CSS and Javascript code to create interactivity and UI. Thanks to my wife and daughter for beta-testing, lots of fun beta testing. 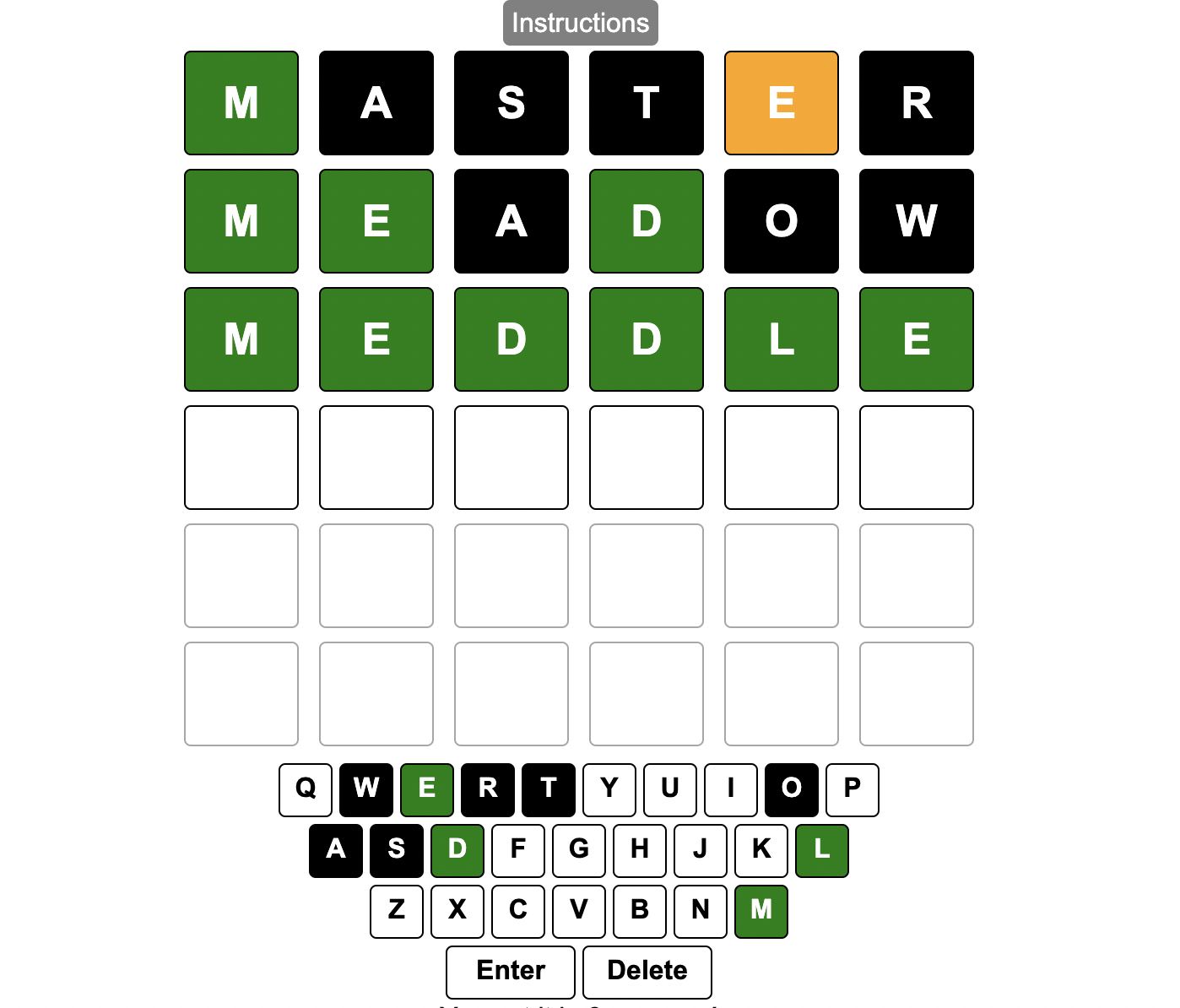