It’s March and for those who follow sports, that means college basketball and March Madness.  The tournament is mainly interesting because of two reasons: (1) filling out brackets and (2) watching and hoping for upsets .  This interactive March Madness matchup visualizer helps do both of these things by showing you the history of the tournament (since 1985 when the tournament expanded to 64 teams) in terms of matchups between teams with different seeds (1 through 16 in four regions).

The interactive visualization gives you a table where you can specify specific matchups that you might want to see (1 vs 16, 8 vs 9, 5 vs 12, etc) and you can see the number of games won by each team, as well as the distribution of game winning margin.  It really gives a good feel for how competitive the games are.

The default matchup visualized is all games that involve non-equal seeds (i.e. not 1 vs 1, etc).  This shows the distribution of scores and which team won. You can also specify a specific seed and look at their matchups vs all other seeds (by clicking on cells in the “All” column).

Finally, you can also look at these matchups for the entire tournament or by specifying specific rounds.


Some things I found interesting:

Hopefully, you find this is an interesting and useful tool to explore while you enjoy March Madness.

Data and Tools: programmed entirely in javascript, and historical game scores were downloaded from sports-reference.com.  If you are at all interested, the programming involved lots of arrays.  I’ve done alot of work in Excel, so my default is to think in a 2-dimensional matrix pattern. 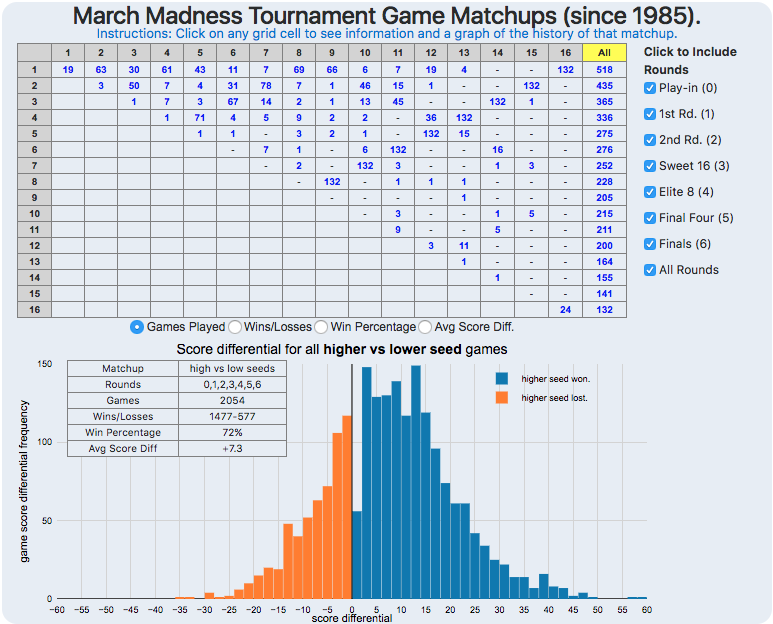