The graph will be updated as new data comes out on the sales of the Model 3 (using the estimates from InsideEVs.com). If you click on legend you can toggle on and off specific data, such as the number of pre-orders and see how the total sales (i.e. shipped to customers) compares with those initial orders. The dashboard at the top also shows the monthly production rates (average and the latest) and the number of months it will take to fill all the preorders at these rates (spoiler: it’s a long time).  As a result, it looks like many of those pre-orders will be waiting into 2019 and maybe even 2020 and beyond before they get their Model 3.

This will be a fascinating story to watch over the next few years. Hopefully, they will work out their manufacturing issues quickly and can make good on their vision to lead themselves, other automakers and consumers to affordable zero-emission electric vehicles.

Bloomberg also has their own Model 3 Tracker here: https://www.bloomberg.com/graphics/2018-tesla-tracker/

It appears that their estimate is a bit higher than that of insideEVs. In the next few months we’ll see how their estimates jibe and whether to update our data.  There’s lots of interest in this transition that Tesla is undertaking. 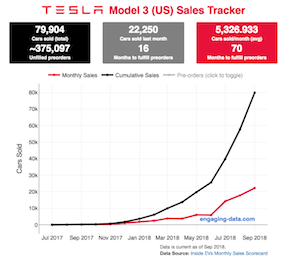 Data and Tools: This chart uses the Javascript plot.ly engine and monthly sales data from InsideEVs.com.