There was lots of interest in the calculator to estimate counting time (in English) to one million, one billion and up to one trillion.  I decided to do the same for other popular languages (Spanish).  Here is the calculator that will calculate how long it takes to count to one million (or larger numbers) in Spanish.  If you’d like to see this in Spanish click here.

When you plot the syllables for all the numbers from one to one million you get the following graph.  It also includes the cumulative average syllables (which reaches 14.5 syllables when averaging all numbers between 1 and 1,000,000). The maximum number of syllables in numbers between one and one million is 19 and there are lots of numbers that have this many syllables (note the log-scale axis). The first number to have that many syllables is 444,441 (cuatrocientos cuarenta y cuatro mil cuatrocientos cuarenta y uno). 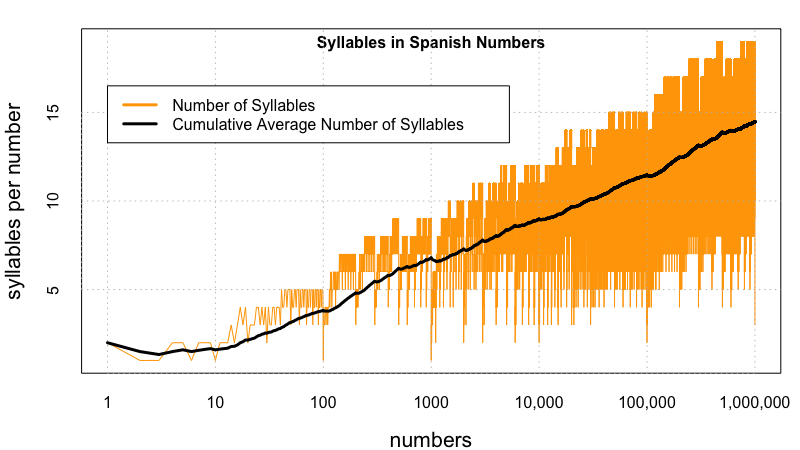 This histogram rearranges the data from above into bins to show the distribution of syllables in all the numbers up to one million.

Before posting this, I made a preliminary comparison of counting in English, Chinese and Spanish.  In posting that, I received a ton of (helpful) feedback about some mistakes I had made and I learned a lot about some of the quirks of numbers in Spanish and especially about syllables and diphthongs. I had made a number of incorrect assumptions about the number of syllables there are in some of the Spanish numbers. The table below shows the correct number of syllables in these words and the American accent version of these words that I was using, where the diphthongs (combinations of vowels) are separated and spoken as two syllables instead of one.
For example, I say siete as “see-eh-teh” and not “sie-teh”. Anyway, if one were to count this incorrect way, it takes way longer to count to one million (about 28% longer) as my original calculation before being corrected was that the average from one to one million is 18.5 syllables per number instead of an average of 14.5. 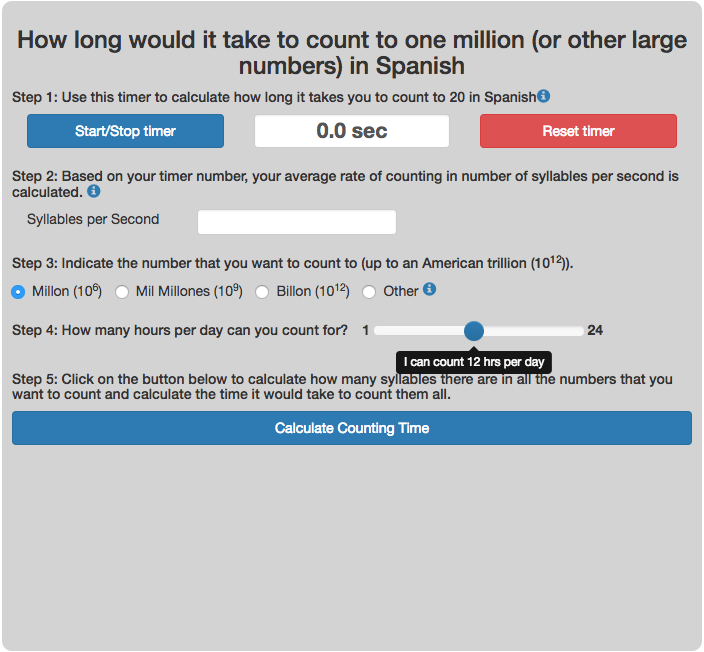 Thanks to all the helpful Redditors in the r/Spanish and r/Linguistics groups who helped me.

Data sources and tools: Lots of web searches to better understand the numbering system for Spanish.  This info was used to create a program that could calculate the number of syllables for any number between one and 1 trillion in Javascript.  The calculator is programmed in javascript. I used R (R Studio) to make static plot to embed in this post.  The histogram is made using the open source plot.ly javascript engine.