Here is the 2nd update of the original graphs that I made of Bryce Love’s rushing awesomeness.  Bryce Love is still in a different league from all other running backs in the college football (and now has almost 300 yards more than his next closest competitor, and more than twice as many rushing yards as Saquon Barkley of Penn State).

This past Saturday, he had a great start against Oregon and helping Stanford jump out to a 14-0 lead in the homecoming game.  He had 147 yds on 17 carries and 2 TDs in basically one half of football (he injured his ankle on his first play of the 2nd half). Because he only played essentially half the game, Bryce Love had his lowest rushing total of the season. Still, he has 1387 rushing yards for the season (through 7 games), and still averaging over 10 yards per rush.

Because of his continued excellence over the last few weeks, there has been more discussion of him as a legitimate Heisman contender.  Hopefully he can continue his amazing performances and help keep Stanford in the hunt for a Pac-12 title.  It’s good that Stanford has a week off so his ankle can get better. 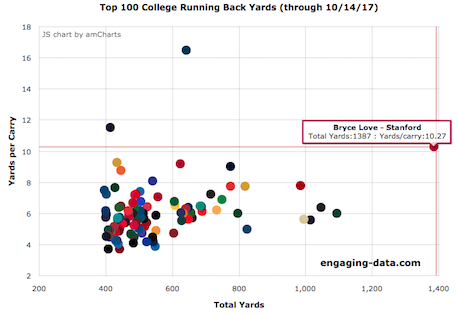