I am updating the original graphs that I made of Bryce Love’s rushing awesomeness.  Bryce Love is still in a different league from all other running backs in the college football (about 250 yards more than his next closest competitor).

On Saturday, he had a very good game against Utah by most normal running back standards (152 yds on 20 carries and 1 TD). But in the grand scheme of Bryce Love, he had his lowest rushing total of the season. Still, he has now surpassed 1200 yards for the season (through 6 games), and still averaging over 10.5 yards per rush. And his 68 yard TD run was critical in helping Stanford beat Utah in what was a close game.

I’ll keep this page updated to keep track of his Heisman runner up campaign (Stanford football joke, since they’ve had 4 runner ups in the last decade).  If he keeps up this pace, he’ll hopefully break that streak. 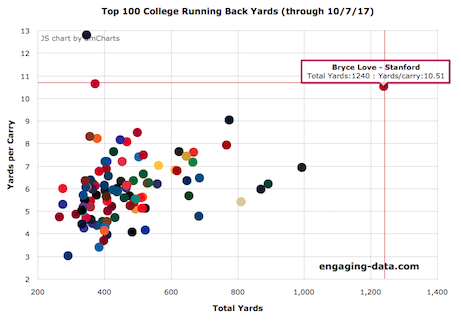